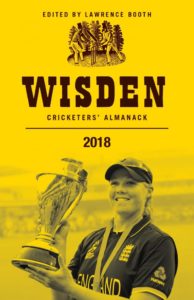 In recent times, athletes have become brand names and the famous Wisden Cricketers’ Almanack’s cover is one of the highest goals you can reach in this sport. After 154 years of male covers, Anya Shrubsole is the first woman to be featured on the cover of the famous Wisden Cricketers’ Almanack. The 26-year-old England World Cup winner got the opportunity to make history after receiving the player of the match title when England faced India in the Lord’s World Cup finals. Anya was the key player of that match and brought victory to England after she took five wickets in 19 balls.

Shrubsole had this to say. “To be on the front of such an iconic and historic book means a huge amount. It’s an amazing honour and a privilege. It’s a clear representation of the strength of the women’s game.”

However, this is just one of the many Anya’s achievements. Last week the International Cricket Council crowned her with the annual Spirit of Cricket award. Furthermore, Anya was the first female recipient of the Christopher Martin-Jenkins Spirit of Cricket award. She was also nominated for the BBC Sports Personality of the Year. The award went into Sir Mo Farah’s hands, which was a surprise as most UK betting apps had the boxing heavyweight champion Anthony Joshua as a favourite.

Wisden Cricketers’ Almanack is a bible for all cricket enthusiasts. The magazine has not missed a release date for 154 years, and 2018 print will be their 155th anniversary. Since its first release in 1864, Wisden has been a go-to magazine for everyone looking for a 12-month review of cricket. The 2016 cover featured England all-rounder Ben Stokes, and Virat Kohli appeared on the 2017 cover.

On the other hand, the editor of Wisden, Lawrence Booth shared his excitement about the first female cover. “Anya Shrubsole was a natural for this year’s Wisden cover. She stole the show on the most memorable day of the 2017 summer. Shrubsole is Wisden’s first female cover star and thanks to the excitement she generated that day at Lord’s, almost certainly not the last.”

Anya’s cover is an important step for further acknowledgment of female cricket athletes. And as Lawrence said, we hope that this won’t be the last female athlete on the cover of Wisden.